With this week's release of results from the four-yearly Trends in International Mathematics and Science Study (TIMSS) we now have 20 years of data on mathematics and science levels in Australian schools.

The results are not encouraging. According to the report, TIMSS 2015: A first look at Australia's results, released by the Australian Council for Educational Research, average achievement levels in secondary schools continue to slide in comparison with performances in many other countries.

As the figure below shows, the gap between Australia and Singapore, the world's highest performing country in Year 8 mathematics, widened between 1995 and 2015. Only seven per cent of our students now perform at the advanced level in mathematics, compared with 54 per cent of students in Singapore.

We have also been overtaken by a number of countries that we once outperformed, including the United States and England. Australia now performs below 12 other nations, including the Russian Federation, Kazakhstan and Slovenia. 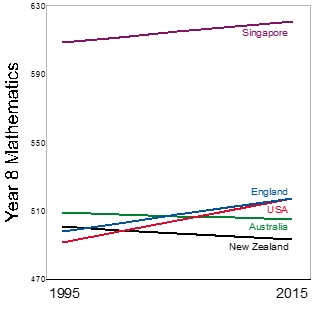 In Year 8 science, the picture is not much better, as the figure below shows. Levels of science achievement in Australia were unchanged between 1995 and 2015. The gap between Australia and the highest-performing countries widened. Seven per cent of Australian students now perform at the advanced level in science, compared with 42 per cent of students in Singapore. We are significantly outperformed by the United States and England, as well as by a dozen other countries including the Russian Federation, Kazakhstan and Hungary. In primary schools the picture is a little more encouraging, with some evidence of improvement in Year 4 mathematics levels over the past 20 years. But for a nation that believes its future relies on increased levels of science, technology, engineering and mathematics (STEM), greater innovation and increased numbers of students studying mathematics and science in the senior secondary school, the latest results are concerning.

Which brings us to the question of what it will take to lift levels of mathematics and science learning in schools.

The answer is not to do more of the same. Reworking the school curriculum, testing students' numeracy levels and maintaining existing approaches to teacher professional development are unlikely to produce world-class improvements.

The answer lies in raising the effectiveness of classroom teaching, which in turn depends on teachers with high levels of mathematics and science knowledge implementing proven teaching strategies.

Significant improvements also depend on better ways of monitoring where students are in their mathematics and science learning. What do they currently know? What do they not know? What misunderstandings have they developed? Diagnostic information of this kind is crucial for targeting teaching, setting personal learning goals and monitoring individual progress. Teachers, students and parents require clear roadmaps against which they can monitor long-term progress. But quality feedback of this kind is often missing. In its absence, teachers deliver the same year-level curriculum to all students and then grade them on how much they have learnt.

The 20-year slide in maths and science learning is a national challenge that requires a national response. We cannot afford another 20 years of stagnation.

ACER is the national project manager for TIMSS and has released the results on behalf of the Australian, and state and territory governments.

The TIMSS 2015: A first look at Australia's results report is available at www.acer.edu.au/timss