From deficit to digital strength – Indigenous learning through gaming

The Deadly Gaming action research pilot project is investigating how the use of digital gaming might engage and motivate Indigenous learners in the primary school years. In this reader submission, project leader Dr Troy Meston shares details of the initiative and some of the early findings.

Over the last 15 years, Indigenous educational achievement has garnered significant attention from Australian governments, policy advocates and teachers within schools. Annually, the Closing the Gap summary has translated the impact of this action, and unfortunately, meaningful progress remains mostly undefined and unfulfilled (Bishop, 2021).

Across this period, as early as 2011, Professor Geoff Masters recognised the urgency for research to be a part of meaningful change: ‘The purpose … is to learn from research about the most effective ways to close the gap in educational outcomes between Indigenous and non-Indigenous students, this is a significant challenge, not just for education, but for all of Australia,’ (Masters, 2011).

Regrettably today, Indigenous learners across the nation continue to linger on the margins of meaningful achievement. The intricacy of confinement entangled between the past and future is made increasingly more difficult by an Indigenous-centric exclusion from the digital world (Radoll & Hunter, 2018). This exclusion – often called ‘the digital divide’ – is summarised by a lack of connectivity to the internet, the cost of digital devices, the use of out-dated technology, and rudimentary digital skills (Rennie et al., 2016).

Professor Rigney (2020) has called for educators to grapple with the emergence of 21st Century skills inside curriculum models which need to be driven by adaptive pedagogies that best suit learners most in need. Given the socio-technical nuances of digital inclusion and ongoing legacies of underachievement in schools, Indigenous learners face immense challenges as Australia moves further into the 21st Century.

A decade on from the forecasts of Professor Masters and Professor Rigney, a research team from Queensland’s Griffith University and contributors from a local urban Indigenous community, collaborated on an action research pilot called Deadly Gaming, which explored the intersection of technology and Indigenous culture.

The focus of this initiative investigated how the use of gaming, with PlayStations, Nintendo Switches and iPads, might engage and motivate learners, generating crossover opportunities into mainstream classrooms and learning capabilities, such as literacy and STEM (Science, Technology, Engineering and Mathematics).

Deadly Gaming occurred in our pilot school two days per week, from term 2 to term 4 in 2021, with a mixed-aged cohort of 25 Indigenous learners from Prep to Year 6. The central component of this research was the imperative for Indigenous knowledge, voices and interpersonal dynamics to strategically insulate the use of technology across the project.

In addition to the physical space, Indigenous pedagogical and nurturing strategies were used also to teach and support learners. For example, the Deadly Classroom included an Acknowledgement of Country, use of Aboriginal English, Indigenous processes of interpersonal relations (such as peer-to-peer mentoring) and Indigenous teachers adopting a nurturing role, where students used ‘Aunty’ and ‘Uncle’, rather than ‘Sir’, ‘Mr’ or ‘Ms’.

To evaluate Deadly Gaming, researchers utilised a multi-methods approach, combining quantitative and qualitative techniques paired to assess both student and teachers’ perceptions of the usefulness of gaming, and to better understand how gaming engaged and motivated students. Student portfolios were also used as a summative assessment tool, which contained: in-class workbooks; worksheets; script work for producing a gaming video; an exam centred upon the language of gaming; researcher observations of student effort, cooperation and engagement; and the production of a YouTube-style gaming video. The portfolio enabled researchers to layer collected project attitudes and observations with a collection of student outputs.

What did the research find?

A complete analysis and peer-reviewed publication of Deadly Gaming is forthcoming, where our findings are discussed in greater detail. However, in short, the pilot study demonstrated the innate love Indigenous learners hold for technology and gaming devices and the role schools can play in providing access and exposure to devices not available in most homes.

Findings highlight students felt empowered to share their expansive knowledge of the digital world. In these language encounters, we saw the power dynamic flip – where the researchers and teachers would be introduced to the new or technical language associated with gaming, the internet, YouTube and social media. Students also demonstrated leadership, guiding the uninitiated adults through the rigours of device set-up, downloading new content, and how to solve tech or connectivity issues.

Teachers noted, it was encouraging to see learners who often experience difficulty in general classrooms leading adults through their digital worlds. Opportunities which allow classroom power dynamics to be shared will often produce learning contexts where disengaged learners can thrive (Hyde, 2005), and within lessons we regularly found digital gaming to be a conducive vehicle for this to occur.

Researchers frequently heard feedback from parents commenting how often children would talk of the project at home and how easy it was to get children ready for school on the days of Deadly Gaming (the project was taught in school two days a week, over eight months). Considering regular school attendance can be problematic for some Indigenous learners (Dreise et al., 2016), the incentive of student-centred, technology-driven, learning experiences, offers the promise of creative experimentation for schools and educators.

While being far from a magic bullet, and with considerable work remaining upon how best to roll out gaming for learning in mainstream classrooms, there exist already many opportunities to utilise gaming for marginalised and at-risk learners. More specifically, for Indigenous learners, we found that by framing gaming experiences within the Indigenous cultural values of sharing and caring, the Deadly Gaming classroom was cohesive and supportive, and in these game-based learning experiences, there are obvious synergies between the Australian Curriculum, natural inclinations for learning and future research.

There is also a need to better refine age-appropriate gaming experiences with the learning areas and General Capabilities of the Australian Curriculum, and work to map learning experiences from a range of ‘off-the-shelf’ games so to create a repository of materials, lessons and resources to better augment teacher applications.

As the classrooms of tomorrow continue to adapt to the normalisation of digital technology, educators will be increasingly challenged to create and apply new techno-centric tools to meet the ever-changing needs of learners. In 2011, Professor Rigney concluded: ‘Without modernising Indigenous education for the 21st century teachers face a class of students who: live in digital ghettos; are not e-enabled; whose age in web years is in single digits; and who remain a generation divided,’ (Rigney, 2011, p. 8).

Deadly Gaming was funded through an Education Queensland Horizon grant. Schools that would like to learn more about the pilot can contact project leader Dr Troy Meston at t.meston@griffith.edu.au.

Rigney, L. I. (2011, August 08). Creating Indigenous Classrooms of Tomorrow Today: What children will need to know and how to create it? [Paper presentation]. 2011 - Indigenous Education: Pathways to Success. https://research.acer.edu.au/research_conference/RC2011/8august/11

How do you provide opportunities for students to share their knowledge in the classroom, with other students and teachers?

In this pilot, the school’s STEM room featured ‘a seated yarning circle, Aboriginal and Torres Strait Islander flags, Indigenous floor mats, and culturally attuned gaming posters’. How are you creating culturally safe spaces for your own learners? 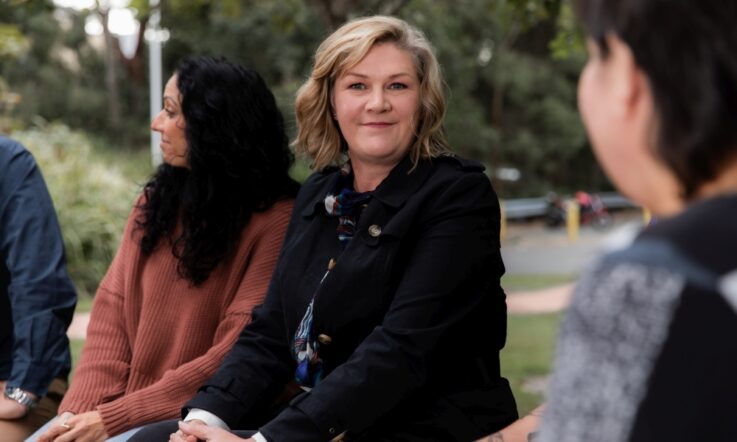