Raising the professional status of teaching

In Australia, there appears to be an intention on the part of governments that our teachers also should be drawn from the top 30 per cent of school leavers. The Accreditation of initial teacher education programs in Australia: standards and procedures specifies that entrants to initial teacher education should have levels of personal literacy and numeracy ‘broadly equivalent to those of the top 30 per cent of the population'.

So to what extent are teachers being drawn from the top 30 per cent of school leavers in Australia?

Part of the answer can be seen in the following graph. The Australian Tertiary Admission Rank (ATAR), despite its shortcomings, is the best indicator we have of overall performance in Year 12. The graph shows that, while the vast majority of Year 12 offers to Science and Engineering courses are made to students with ATARs above 70, fewer than half of Education offers are made to students with ATARs above 70. In this country, we are falling well short of drawing our future teachers from the top 30 per cent of school leavers. 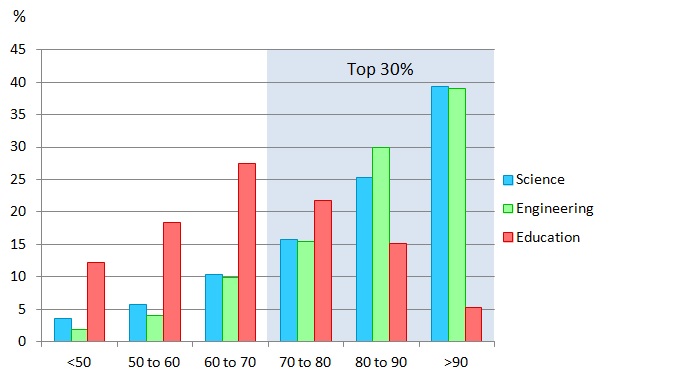 Figure 1. Percentage of Year 12 offers in each ATAR band - Science, Engineering and Education (2015)

And the picture is becoming worse, not better. Over the past three years, the percentage of Education offers made to students with ATARs above 70 declined significantly:

Figure 2. Percentage of Year 12 offers to students with ATARs above 70

These observations should be of concern because the evidence is clear that the world's highest-performing nations in international achievement studies consistently attract more able people into teaching, resulting in better student outcomes. The McKinsey study of the world's best-performing school systems found that top-performing countries recruit teachers from the top third of school leavers. That study also concluded that it is not possible to make substantial long-term improvements to a school system without raising the quality of the people entering teaching. There is a clear lesson here for Australia.

Given that the world's top-performing school systems recruit the vast majority of their teachers from the top third of school leavers, and Australian governments appear to aspire to do the same, national progress in achieving this goal could be monitored by tracking the percentage of Education offers made to Year 12 students with ATARs greater than 70. This percentage would provide a simple national performance indicator.

This is not to say that ATAR is an ideal measure for selecting teacher education students; some applicants with relatively low ATARs can make excellent teachers. However, very high-performing countries, including Singapore and Finland, place a strong emphasis on academic achievement in their selection processes, and then also select on the basis of other attributes such as motivation for teaching, willingness to learn and communication skills. The high performance of these countries is due in part to deliberate long-term strategies to recruit future teachers from their best and brightest school leavers.

International experience suggests that the achievement of such an objective is entirely feasible. A number of countries have succeeded – usually over a period of time – in making teaching a highly regarded and sought-after career. The ability of these countries to attract more able students into teaching raised the status of teaching, which in turn resulted in still more able students choosing teaching as a career:

In some of the world's highest-performing countries, entry to teaching is now as competitive as entry to courses such as engineering, science, law and medicine.

The construction of a performance indicator to monitor Australia's success in recruiting more able people into teaching is a first step. A second and more important step is to identify policies capable of raising the status of the teaching profession and encouraging more able people to choose teaching as a career. Here, the findings of the McKinsey study are encouraging. That study concluded that, in high-performing countries, improvements in the status of teaching were mainly policy driven; that there are common strategies and best practices for attracting strong candidates into teaching; and that the right policies can change the status of teaching in a country in a relatively short period of time.

According to the McKinsey study, effective policies adopted by these high-performing countries include:

Over the past decade, Australia has seen a decline in the performance of our 15-year-olds in the OECD's Programme for International Student Assessment (PISA). At the same time, performances in a number of other countries have improved. Lessons from the world's top-performing nations suggest that a long-term key to reversing Australia's trend will be to make teaching more attractive to the best and brightest of our school leavers, and this, in turn, will depend on a critical set of policy changes.