Coding is a hot topic in education. Estonia is seen as trailblazer, and last year England introduced it into its primary curriculum. But, as one UK teacher explains, it's not all about sitting in front of a computer.

The skipping ropes are laid out in the playground ready for the start of the lesson, but it's not for PE - this is about teaching computing skills.

'We call it an unplugged lesson,' Peter Gaynord tells Teacher. 'It's all about computational thinking, problem solving and designing algorithms. A lot of the early programming [curriculum content] is actually about spatial programming.'

Gaynord is a Key Stage 2 (Year 3 to 6) classroom teacher at Histon and Impington Junior School on the northern fringes of Cambridge, England. He's also a Master Teacher in Computer Science.

The unplugged lesson involves children using the skipping ropes to make a grid on the floor. They then place photos of landmarks from their village in some of the spaces.

'They use cards with arrows on and effectively design a step by step route to solve a problem such as: You need to go to the supermarket, but you need to go via the primary school, from the start position. What they're actually doing is designing an algorithm.'

England introduced Computing as a foundation subject into its national primary curriculum in September 2014. Gaynord's 'day job' is Year 4 classroom teacher, but his Master Teacher role (a title awarded through CAS, the Computing at School subject association) also involves him helping other educators get to grips with the new content.

'The curriculum itself is very simple, you could cut it down to one sheet of A4, but it's about - What does that mean in reality, as a series of [lessons]?

‘We were already doing what was called ICT. The new curriculum splits broadly into Computer Science (which is all your programming stuff and computational thinking), Digital Literacy, ICT and e-safety.

'When the Computing curriculum is new, everybody gets really hung up on the programming, the actual coding, don't they? But ... there's a big chest of goodies labelled "computational thinking" and the coding is a tiny bit of that. All the thought and design, as to whether your piece of code works, happens before you start tapping keys on a computer.'

In Reception classes at the school, students aged four and five are learning an algorithm song to the tune of Frère Jacques. 'They are learning the basic concepts of forwards, backwards, stop, right, left, because those are some of the building blocks that you need,' Gaynord says.

'But even at Key Stage 1 (Year 1 and 2) you can say, together we're going to write an algorithm for putting your shoes on ... or brushing your teeth. So we're starting with almost procedural, everyday things with young children as a starting point to this concept of: computers use algorithms - algorithms are like your design of your computer code.

'That's what we're trying to get through to the children, that the subject [Computing] has all these elements to it. Like abstraction, and the London Underground is a brilliant example of something that's vastly complicated, where the trains follow wiggly routes all over the place. But somebody did that amazing map that simplified it all visually, so that you, as a user, you can plan you're route, and that's called abstraction. Another one is efficiency ... children spotting repetition in algorithms.'

Of course, not all of the lessons are unplugged. Gaynord stresses that coding is part of the curriculum and says, if he were a child, he'd be disappointed if the walking around in a playground in a skipping rope grid didn't lead to some work on a computer screen.

'There are some beautiful [programming] languages now for young children that are colourful, animated ... they absolutely love it. The thrill and the buzz in the room is quite something to behold.'

He recommends using Scratch and ScratchJR as the 'bread and butter' language for primary students because it's not in a text format. Once children find their feet, he says educators can probably think about a text-based programming language like Logo, or even Python.

Gaynord says although schools were already covering most of the elements of the new curriculum, the Computer Science component was something new. 'For a lot of schools, not all, ICT had become "let's find some information off the internet and present it in PowerPoint".'

He recalls the new foundation subject came in with huge fanfare and enthusiasm. 'People like myself and CAS ... we know what the world out there is like and we're delighted that we're now given licence to teach children the subject of Computer Science.'

The challenge, Gaynord adds, is that for the primary curriculum to work in England it has to be taught, in the main, by generalist teachers who don't have degrees or any background in Computer Science.

'That's my extra role ... not to go out there and just teach it, but to teach the teachers to teach it. We were at your [Australia's] stage about three years ago. It's not going to happen overnight.'

When he sat down to map out what the curriculum document would look like in the classroom, he needed to find a way to support teachers who weren't confident in some of the topic areas. That meant lots of training and modelling of classroom practice.

'The challenge [for me] was, even if I wrote one simple computing lesson to do with the easiest thing, so something like programming in Scratch, could my colleagues deliver it?

‘I thought, well, we're in a start up phase. So I wrote a series of lessons on a theme, the first one I tackled the things [on the curriculum] that looked a bit scary, like: How do search engines work?'

He also links to technologies to enable other teachers. 'For example, if I do a series on Scratch programming lessons I'll write a nice clear plan, and I'll do [electronic resources]. When it comes to the tricky bits, like how to drive the software application, or the robot, or programmable toy or whatever you're using, I've tended to include a link through to YouTube on the plan, so they're not stressing about how they going to make it work.'

You can see an example of the unplugged lesson mentioned in this article via YouTube, in the CBC News report: Global Push to Teach Coding. 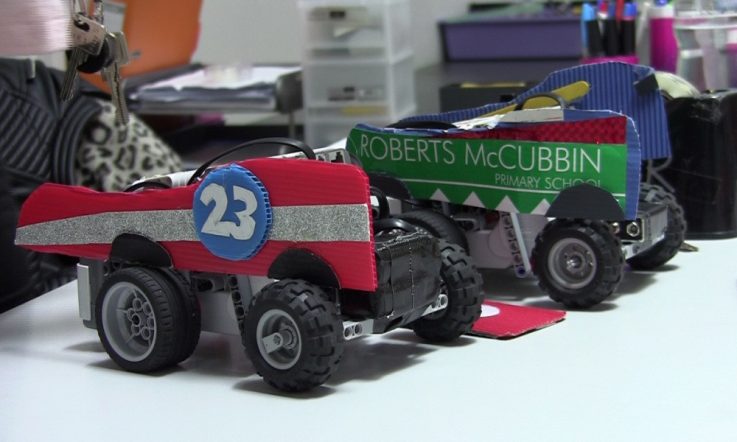