Teachers in school libraries - what does the data tell us?

Each year, the Wednesday of Library and Information Week is synonymous with National Simultaneous Storytime (NSS) – a time when schools, libraries and playgroups across Australia stop to share the same book at the same time. Hats off to the Australian Library and Information Association (ALIA) for choosing Jol and Kate Temple's I Got This Hat, illustrated by Jon Foye for NSS 2016.

It is a big week for school libraries with the announcement of the Children's Book Council of Australia (CBCA) Shortlist last Friday. The shortlist containing the top Australian children's books published in the past year forms the basis of reading activities in schools leading up to Children's Book Week in August. This year's theme of Australia! Story Country is rich with possibilities. 'I Got This Hat' has been chosen for this year's National Simultaneous Storytime.

No-one needs an excuse to read, but children need ready access to resources to read. They need someone to lead them to texts that are relevant, interesting and worth reading. This is one of the key roles of the school library, and of the specialist teachers who work in libraries.

A 2016 report by Dr Paul Weldon analysed data about teachers working in school libraries. The data were from the Staff in Australia's Schools (SiAS) surveys carried out by the Australian Council for Educational Research (ACER) on behalf of the Commonwealth Department of Education in 2007, 2010, and 2013. This study provided greater understanding of who is teaching in Australia's school libraries and, in particular, highlighted two trends that warrant further attention.

In just three years, a sharp divide has opened up between low SES schools and high SES schools. The 2010 SiAS data showed the proportion of teachers in primary school libraries equally distributed across the three bands of low, medium and high socio-economic status schools (based on postcode). By 2013 we see the allocation of teachers in low SES primary school libraries drop by around 16 per cent, while high SES primary schools experienced growth of over 13 per cent in the same period. Secondary schools followed the same trend but to a lesser degree. The data does not tell us why this gap has developed so strongly in such a short period of time. What are the priorities in high SES schools that lead them to increase the number of teachers in their library? How is it that students in greater need of reading resources and reading support seem to be missing out? 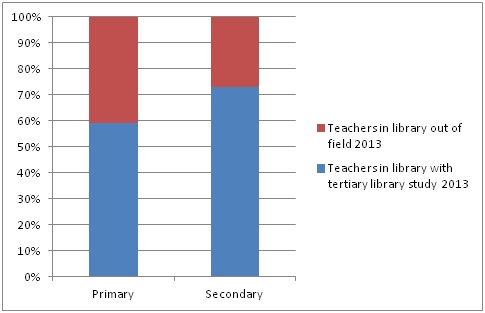 Teachers working in the library, with and without tertiary library study, 2013

Click on the link to read more in the full report.

Weldon, P. (2016). What the Staff in Australia's Schools Surveys tell us about teachers working in school libraries. Camberwell: Australian Council for Educational Research. Retrieved from http://research.acer.edu.au/tll_misc/25

This year's National Simultaneous Storytime takes place on Wednesday 25 May, 2016. For resources and information click on the link.

To find out more about Library and Information Week visit https://www.alia.org.au/liw