Performance pay linked to improved test results; financial rewards for school improvement; sanctions for schools that do not meet annual improvement targets; greater competition between schools for students – these are among the ‘incentives' that governments and education systems use in an attempt to drive school improvement. But just how effective are incentives as an improvement strategy?

By the turn of the century, the observation had been made in many countries that substantial increases in expenditure on schools had failed to deliver measurable improvements in student performance. International studies showed total national spending on schools, average class sizes, formal teacher qualifications and teachers' years of experience were poor predictors of how well students performed on tests in key areas of the school curriculum.

This led some economists of the time to conclude that ‘input-based' policies such as providing more money to schools, reducing class sizes and improving teacher qualifications had ‘failed', and that improvements in schools now depended on giving teachers direct incentives to raise student performance:

A simple idea that pervades economics is that incentives have powerful effects. In the case of schools, few incentives relate to the object of interest – student performance. [1]

Over the past fifteen years, this simple idea has had a far-reaching influence on the education policies of many countries, especially in the English-speaking world.

Initiatives to provide better incentives for improvement have included the creation of stronger performance cultures in schools, with teachers and school leaders being held personally accountable for improving students' performances. This, in turn, has required better measures of student performance and, in particular, measures that can be compared reliably across classrooms and schools. A number of countries have used test scores to allocate financial rewards for school improvement, performance pay for teachers, and to identify and intervene in schools that fail to meet annual improvement targets.

And some countries have come up with another incentive – the risk of losing students to a better performing school. To promote this incentive, they ensure the public transparency of schools' test results, encourage greater parental choice of schools, and free schools to operate as independent competitors in the marketplace for students.

Examples of such initiatives include the No Child Left Behind legislation in the United States, which required schools to demonstrate that they were making adequate yearly progress and provided escalating negative consequences for schools that were unable to do this; the creation and publication of league tables of ‘value-added' measures of school performance in England; proposals to introduce financial rewards for school improvement and performance pay tied to improved test results in Australia; and the encouragement of competition between schools under New Zealand's Tomorrow's Schools program.

But there are good reasons to question the effectiveness of incentives as a school improvement strategy. 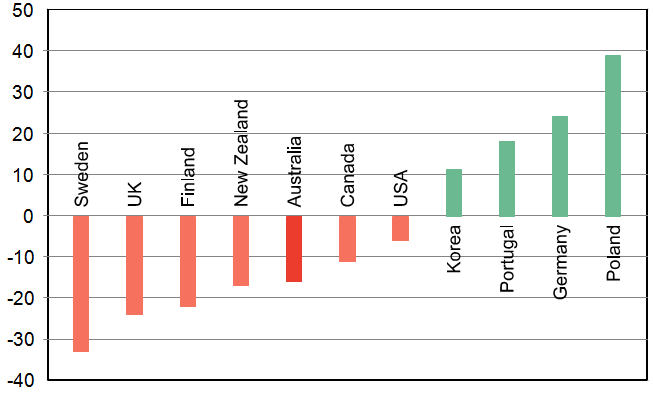 Major English-speaking countries saw significant declines in reading levels, and similar declines in mathematics. Although it's not possible to attribute these declines to any specific education policy, it's also hard to conclude that incentive schemes and new school accountability arrangements in these countries have had a positive impact on student performance.

Second, research is raising doubts about the theoretical underpinnings of incentive schemes. A review published by the US National Research Council concluded that the international evidence was "not encouraging about the ability of incentive programs to reliably produce meaningful increases in student achievement"[2]. Research by RAND Education reached a similar conclusion: "paying teachers to improve student performance did not lead to increases in student achievement and did not change what teachers did in their classrooms". And as well as being of questionable effectiveness, incentive schemes often result in unintended and undesirable behaviours on the part of teachers and schools, ranging from the narrowing of the school curriculum, to withholding less able students from testing, to providing inappropriate assistance to students during tests.

Third, although incentives are popular in the world of business, there is growing evidence that financial rewards are not particularly effective there either - except, perhaps, in relatively low-skilled occupations. In professional and creative work, financial rewards are sometimes counter-productive. In fact, there is evidence from psychology that paying people for what they would have done anyway can lead to poorer performance. Author Daniel Pink argues that what motivates most people at work is not so much money as the opportunity to self-direct, to master increasingly challenging work, and to pursue a purpose and make a difference in the world.

Whether in the form of pay-for-results, sanctions for not improving, or the threat of losing students to competitors, there is little evidence that current improvement incentives are delivering better student outcomes. To borrow a term from Michael Fullan, incentives appear to be among the many 'wrong drivers' of school improvement.