In March this year, Canadian educator Maggie MacDonnell was named winner of the Global Teacher Prize, receiving US $1 million in prize money for her outstanding contribution to the teaching profession. In today's article, MacDonnell tells Teacher about the impact the prize has had on her students and explains more about the positive educational programs she's implemented in her remote school community.

As a young student growing up in the rural Canadian Province of Nova Scotia, Maggie MacDonnell used physical education to better engage with school and build resilience in herself.

Now as an educator herself, MacDonnell encourages her students to use movement, exercise and recreation to improve their self-esteem and contribute to their community in a positive way.

Reflecting on her own schooling, MacDonnell says she's very thankful to her teachers for not only providing her with rich academic experiences, but also volunteering their personal time to arrange and transport students to extra-curricular activities.

‘I think that means a lot in a rural context where the school is often the heart of all the opportunities that can be made for students. I feel now as an adult and as a teacher myself, I definitely look back and I'm very grateful for all the time my teachers put in. As a student I may not have been aware, I think I was pretty naïve and just thought teachers always did that or that was just expected, but I was lucky to have such engaged teachers.'

Once she had completed school and her university studies, MacDonnell headed to Botswana to work in an orphanage for young people infected and affected by HIV/AIDS. She also did work with the non-profit organisation Right to Play, and with refugees, using sport and recreation as a means to connect with young people.

‘I was working at youth houses and helping youth workshops, working at schools for kids who were living on the streets or who were trying to transition off the streets. They might have been selling plastic bags and we were trying to get them back into school … so I've just always loved working with young people, I just love the energy and the possibility that lies within them.' There came a time when MacDonnell made the decision to transition back to Canada, and given all she had experienced abroad, she felt the next logical step would be to work with an Indigenous community. As a result, MacDonnell has spent the last seven years working in a fly-in Inuit village in Salluit, in the Canadian arctic. The school, in a location which cannot be reached by road and where winter temperatures are -25 degrees Celsius, experiences teacher shortages.

‘We're short 17 teachers in my region because it's so hard to recruit people to come up here,' MacDonnell shares. The school board is currently looking for prospective teachers.

‘The language that we use is intergenerational trauma and I work in a context where kids have been affected by decades of colonisation that have happened,' MacDonnell explains. ‘Their parents or grandparents went to residential schools, that's a huge thing that happened in our Canadian history. With Indigenous people, they've been affected by what we call the dog sled slaughters; so there was a specific time in Canadian history when the Federal Government sent up our police force with instruction to slaughter the dogs which had kept the Inuit alive and connected to the land and hunting and safe for millennia, so that was a big trauma that their culture went through.

‘… In the midst of all of this, there's the introduction of alcohol and on a heavily traumatised population, alcohol and addictions, alcohol use and abuse and generally addictions can spread quite rapidly, so my students carry the burden of all of that on their shoulders. And then parallel to all of that, there are decades of underfunding, so they live in a context with a housing crisis, they live in a context with … research shows between 50 to 72 per cent food insecurity where that's measured by them skipping meals or missing meals etcetera.'

Students as agents of change

But through MacDonnell's work at the school and the community development approach she takes, her students are starting to see themselves as agents of change within their community.

‘… I want them to see themselves as solutions and not problems, I want them to see themselves as agents of change and I want them to be masters or the authors of their own destinies. They've been handed some pretty difficult circumstances but what I really hope and especially as Indigenous people and people who have lived through colonisation, is that they can still dream their own dreams of what they may want to be or do, or how they may wish to contribute to their community.'

To do this, MacDonnell says it takes a lot of relationship building and interpersonal skills. She has developed many programs and is always striving to recognise talent and opportunities for her students to explore their interests.

MacDonnell developed a Life Skills program specifically for girls, which encourages them to pursue projects of interest to them, like cookery and mechanics. They also use these skills to take part in the Students Feeding Students program where every day, students prepare a healthy meal for the entire school body. To allow her students to gain professional experiences, MacDonnell partnered with the local day care centre.

In the classroom, MacDonnell focuses on art-based projects as a form of therapy. She has also set up a fitness centre at the school which has become a hub for students looking for a positive outlet, as well as a running club. She has found that physical activity is a fantastic way for her students to cultivate resilience. ‘My students face a tremendous amount of mental health problems. We live in a context where there's a youth suicide crisis, that's how dramatic the mental health issues are. And often, we call it “mental health” and that seems like it's an individual person's problem but these are systemic stresses that my students have to deal with.'

And, while she would never say that physical activity is going to ‘cure' these issues, MacDonnell says at the very least, it gives her students tools they can use and develop with their own hands.

‘If you develop a love for running or if you develop a love of playing basketball or soccer, that's a tool that's now in your hands that you can use whenever you're having a tough time and my students say they do use that when they are going through very difficult times,' she says. ‘They're putting themselves into another state and I know that they still have to walk back into their overcrowded homes and deal with all sorts of issues but at least they're developing some tools to help regulate their emotions and to take more control of their mental health.'

Teenage pregnancies are common in the community, high levels of sexual abuse exist, and gender roles often burden young girls with significant domestic duties. But MacDonnell has found that physical activity is allowing many of the girls in her community to reconnect to their bodies and see themselves as powerful, strong and athletic.

‘They just see it as something that's theirs, that they own, that it's for them first and something that they can strengthen and they can take care of and allow them to experience the world in so many meaningful ways,' she says.

Her efforts to engage students in this way were recognised earlier this year when MacDonnell was named the winner of the US $1 million Global Teacher Prize. The prize has opened up a wealth of opportunities for her students.

This year, her students have travelled to both Argentina and Chile where they met with the Indigenous Mapuche people and took part in traditional New Year celebrations with them. They also were treated to a one-hour meeting with the President of Chile, Michelle Bachelet.

‘These are incredible opportunities, they're meeting powerful people and they're learning to engage with them, feel confident, share their stories, talk with some of our biggest world leaders on a one-to-one basis,' she shares.

During this visit, they also witnessed President Bachelet apologise to the Indigenous Mapuche people for the past mistakes and atrocities committed against them.

‘I would say for $1 million, which is my prize money, I couldn't recreate that,' MacDonnell says.

Her students have also visited the United Nations, and travelled with her to Montreal, Toronto and Ottawa to help her present at conferences. But despite all of these successes, MacDonnell is quick to say that the systemic issues are still ever-present in her community

More recently, MacDonnell has been using her prize money to help her students to reconnect with their culture in a meaningful way.

‘You may not know this but the kayak was invented by the Inuit,' MacDonnell tells me. ‘It's an amazing invention and it's used worldwide … yet in most Inuit communities, that culture of kayaking is not very strong because of the oppression that they've lived through and the shaming and all the ways that they were disconnected purposely and their culture was undermined beneath them.' MacDonnell conducted a two-week kayak training program with her students and other members of the community. She says the students loved being on the water, making a conscious effort to leave their problems on the shore and feel at peace on the water. At one point, a young female student was paddling when she was asked, ‘what does it feel like to paddle?' Her response was, ‘I feel like I'm with my ancestors'.

‘And I'm like, gosh that moment is worth $1 million right there,' MacDonnell reflects.

‘In our Canadian context we've had a very tumultuous history with our Indigenous people, especially in the last 100 years. To know that we've disconnected them from their ancestors purposely and not let them speak their language, taken them from their families and placed them in residential schools and all those types of things – and to know thanks to that prize and thanks to that funding I can create a space and a program where a young woman may be feeling that she was with her ancestors, that's incredible!

‘Those are the profound moments that I love. It's wonderful to know that those things can still happen if we properly invest in creating those types of opportunities.'

Maggie MacDonnell encourages her students to participate in sport as a means of building resilience and better engaging in school. In what ways do you use physical activity to support your students and their mental health? How does this impact their lives? Do you offer a variety of different sports and activities? 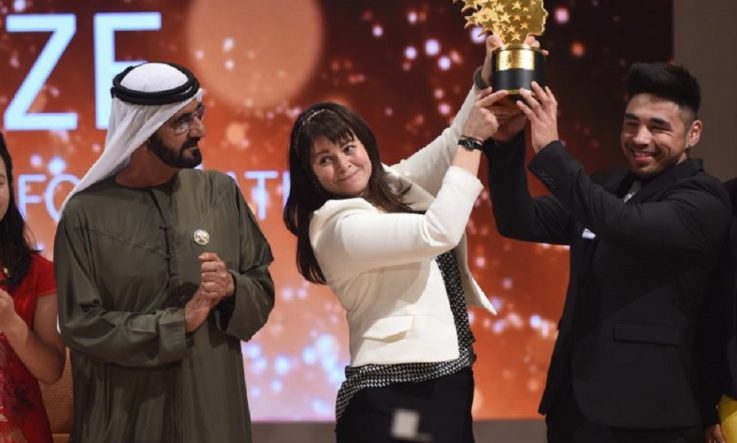 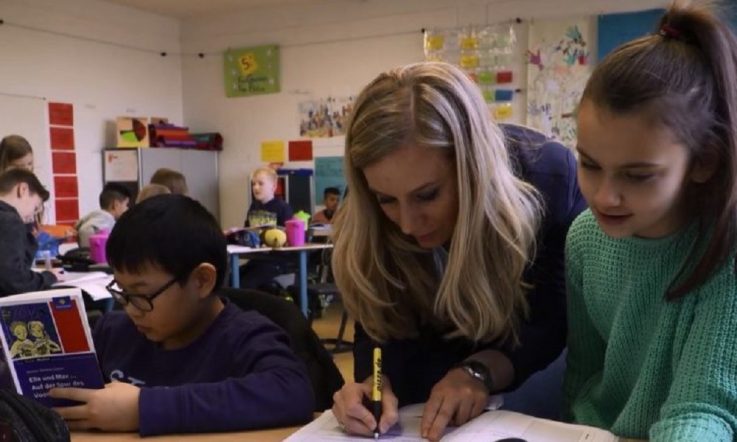 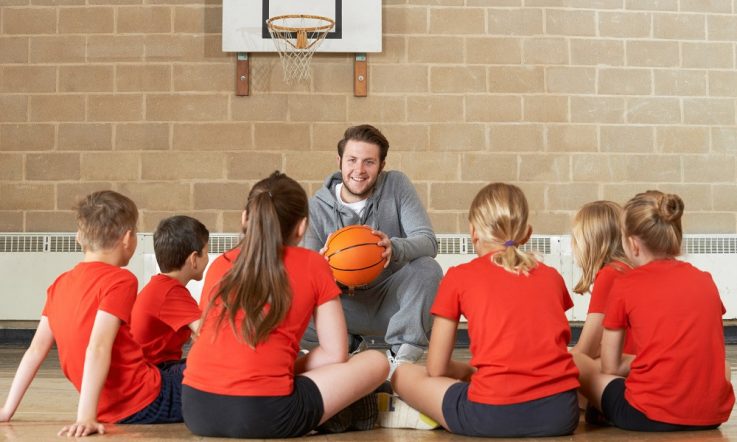