What sort of schools have the best access to teachers?

This is not a new finding – in every previous Australian PISA report similar gaps have been reported. In other international studies such as the Trends in International Mathematics and Science Study (TIMSS) and the Progress in International Literacy Study (PIRLS), substantial differences in achievement have also been reported between students with few books in the home and those with many books in the home, and between students with few educational resources available to them and those with many such resources. All of these findings point to a student's personal lack of resources as being a major factor inhibiting the achievement of our most disadvantaged young people.

Schools, it is argued, can provide students from a low socioeconomic background with the resources and opportunities they need to succeed, thus improving the fairness of the educational system and reducing educational disadvantage – one of the primary tenets of the Melbourne Declaration on Educational Goals for Young Australians (Australian Curriculum, 2009). However the OECD argues that education systems may, perhaps inadvertently, 'increase inequity … by offering a common resource harvested by those who are best prepared for it' (Field, 2007, p. 132).

Access to resources in terms of quality and quantity of teaching and assisting staff was measured in PISA 2015 by asking principals to report on the extent to which their schools' capacity to provide instruction was hindered by a shortage of such staff, with responses on a four-point scale that ranged from not at all to a lot. These scores are transformed into an index score which is scaled with zero representing the mean over the whole OECD, and a standard deviation of 1. Scores higher than zero indicate that principals perceived the impact on their school's instruction to be greater than on average across the OECD. Scores lower than zero indicate that principals perceived it as less of a problem than on average across the OECD. When interpreting these findings, it should be kept in mind that principals did not provide an objective measure of the provision of teachers or teaching assistants, but rather the impact they perceived that a shortage had on their school's capacity to deliver instruction.

Click here to view an enlarged version of the graph below. 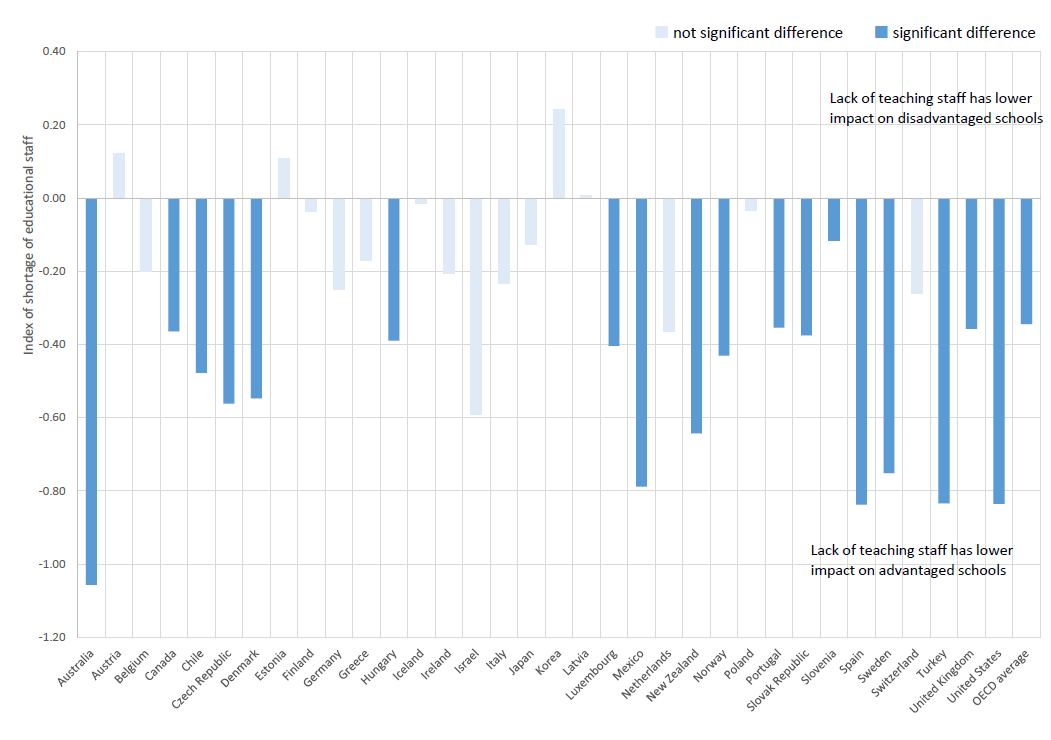 On each of the items comprising this index, students who attended disadvantaged schools were more likely to have principals who reported that each statement was an issue compared to those from more advantaged schools (Table 1).

Click here to view an enlarged version of the table below.

The greatest problem reported by principals of disadvantaged schools was a lack of teaching staff. Thirty-six per cent of disadvantaged Australian students were attending schools in which the principal reported that a shortage of teachers hindered the school's capacity to provide instruction – compared to just 6 per cent of advantaged students. The common resource harvested by those who are best prepared for it.

Can different allocation of teachers compensate for student disadvantage?

Principals of disadvantaged schools in Australia were also more likely than those in advantaged schools to report that as well as not having enough teachers and enough fully qualified teachers, the ones they had were generally less experienced and less prepared, and had higher rates of absenteeism.

While it may seem difficult given the current systems for teacher employment in Australia, we need to avoid having high concentrations of inexperienced and less- qualified teachers in socioeconomically disadvantaged schools. As an alternative, the OECD suggests examining the Japanese and Korean 'career-based' systems, which have mandatory requirements for teacher mobility and career incentives for teachers who work in high-need schools (see Box 1). 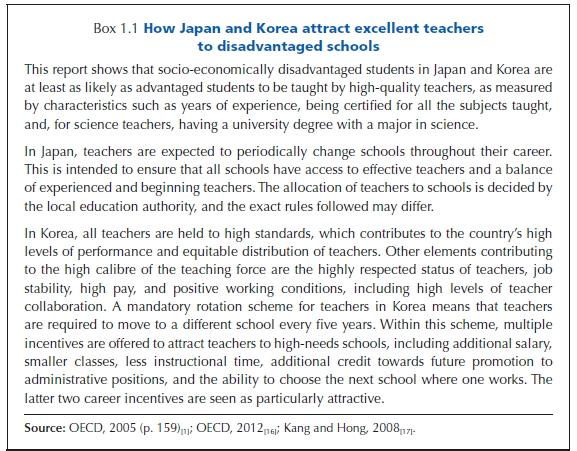