It was recently reported in the media that, in a survey of about 1000 parents, 88 per cent rated the level of resources available at their children's school as at least adequate. Of course, parents' views are only one perspective.

The OECD Teaching and Learning International Survey (TALIS), on the other hand, asks quite specific questions about resourcing of those right at the chalk face – teachers and principals. In Australia, just over 3500 teachers and 230 principals working in lower secondary schools participated in the TALIS study. The sample of schools was drawn to be representative of state, sector, and geographic location.

Principals were asked about the extent to which they felt particular school resource issues hinder their school's capacity to provide quality instruction (not at all; to some extent; quite a bit; a lot). There were 15 resource issues listed, and, by and large, Australian principals responded more positively than those across other OECD countries, on average. 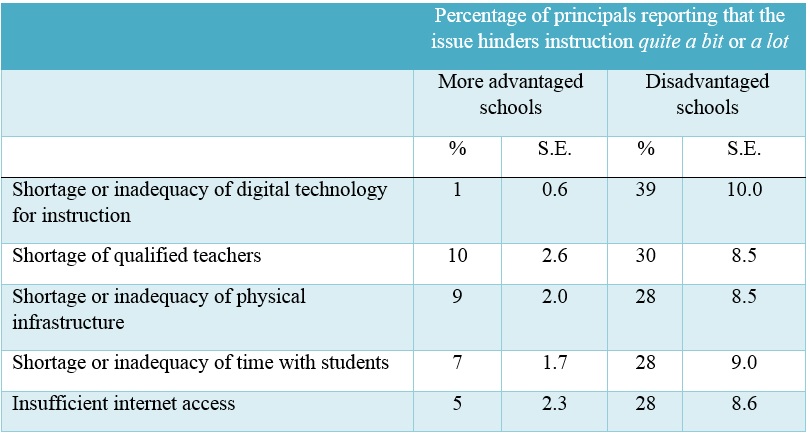 One of the supplementary questions included in the Australian version of the TALIS teacher questionnaire asked teachers to rate the extent to which they felt that their capacity to provide quality instruction to the target class was hindered by nine different factors.

While principals have a school-wide perspective, there was substantial agreement between principals and teachers on the issues they face. Among all Australian teachers surveyed, as with principals, technology was the most commonly identified resource issue. Seventeen per cent of teachers reported a shortage or inadequacy of digital technology and 13 per cent reported insufficient internet access as impacting on their capacity to provide quality instruction quite a bit or a lot. However, on all nine factors there were significant differences between teachers in more advantaged schools and those in disadvantaged schools (Table 2).

The technology issues identified by all teachers were particularly an issue for those in disadvantaged schools, with almost one-third reporting a shortage of digital technology for instruction, almost one-quarter that there was insufficient internet access, and one-fifth that there was a shortage or inadequacy of digital software for instruction. However other, more basic issues were identified as hindering instruction by a substantial proportion of teachers in disadvantaged schools.

One-fifth of teachers in disadvantaged schools reported a shortage or inadequacy of instructional materials (such as books), and 17 per cent reported that a shortage or inadequacy of physical infrastructure (such as school buildings, heating/cooling) hindered instruction quite a bit or a lot. These are very basic requirements for schools in a modern, wealthy economy such as Australia's, and while there has most definitely been a large increase over the years in funding to schools, TALIS data clearly shows that resourcing continues to be a challenge. 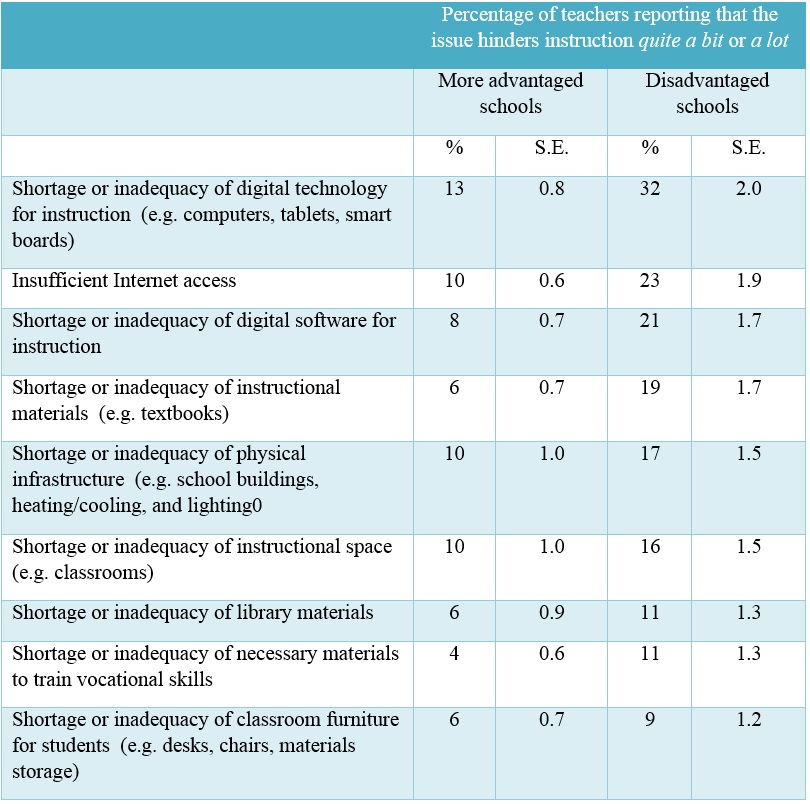 These data, from teachers and principals in Australian schools, present quite a different picture than that reported from parents. With gaps of about three years of schooling evident between the PISA scores of advantaged and disadvantaged schools, it is time to address the resources that are lacking in disadvantaged schools.

Indeed, policymakers should focus on ways to reduce inequality in Australia's education system, such as seeking to resource all schools according to their students' needs. While certainly not the complete story, it is difficult to imagine trying to achieve excellent academic results in a situation in which there are shortages or inadequacies of resources at such a basic level. 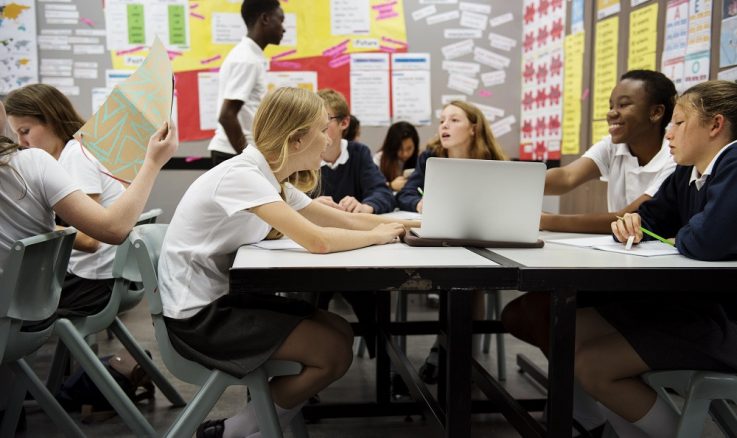 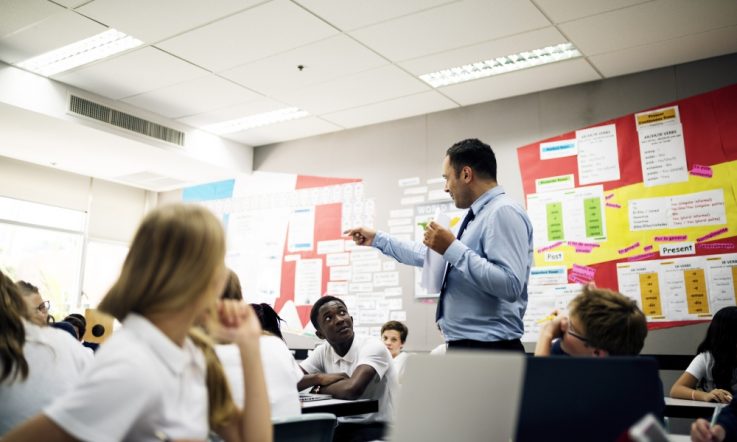 The state of the teaching profession